TAGS: Holly WilloughbyI'm A Celebrity... Get Me Out Of Here!Sair Khan

If you’re eating, we suggest you look away now because things are about to get seriously disgusting over on I’m A Celebrity tonight.

The latest episode will see Malique Thompson-Dwyer and Sair Khan take on ‘Dreaded Deliveries’ where they are forced to chow down on some absolutely revolting treats from the Jungle.

And in a sneak peek from the upcoming episode, it looks like not even hosts Holly Willoughby and Declan Donnelly can stomach this Bushtucker Trial.

As Coronation Street star Sair opens up her takeaway box, 37-year-old Holly squeals: ‘Oh my god. That is teat masala.’ 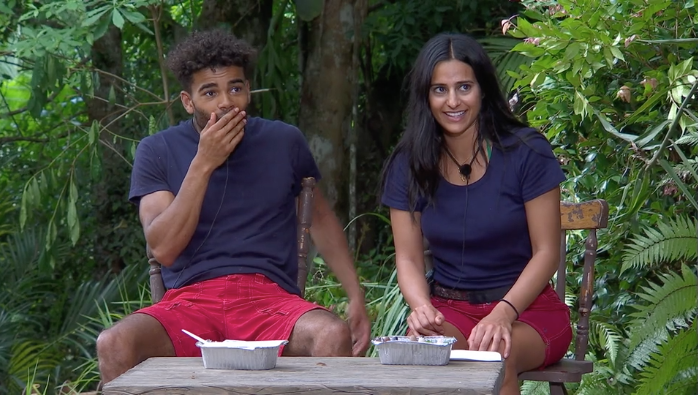 Erm… we’re not sure it does, but if that makes you feel better Sair!

As she sucks down on the animal in a rather bizarre fashion, hosts Holly and Dec can’t help but burst into laughter.

This comes after Anne Hegerty faced her own tough Bushtucker trial yesterday when she took on Hellish Hospital.

The Chase star came across a giant snake, nippy crab and even a spooky nurse as she tried to collect as many stars as possible.

And after a hesitant start, 60-year-old Anne managed to take back an impressive seven meals out of 11 for camp, which meant the celebs got to feast on silky chickens.

Clearly pleased with her effort, Anne told Holly and Dec: ‘I’m glad I bottled it at a later stage than previously.

‘I said if I got 7 I’d feel like that was enough. The previous trial I was so panicked and the critters were so revolting this time I was able to keep it together a bit more. Having seven stars will mean we get a decent meal tonight.’

Let’s hope Malique and Sair are just as successful tonight!