It all started when Celebs Go Dating shared a clip of 20-year-old Georgia stealing a drink from a potential love match during the show’s first episode, before telling him she preferred his mate.

And this clearly didn’t go down well with Essex star Mario, 31, who then went on to tell his own followers: ‘She is just an awful little girl..It amazes me… she is one of the most awful people I have seen on tv.’

But obviously fiery Love Island star Georgia wasn’t about to take the harsh comments lightly, and has since responded with an equally scathing Tweet.

‘Mario you are so fake, to my face you say hello and all nice yet but behind a your phone screen you chuck abuse my way,’ she started the epic rant.

‘Let’s not forget your a grown man with a family and I’m a 20 year old girl that has just stepped into the industry. So just leave me alone.’

She then added: ‘It’s not the first time you have decided to go for me. And to be honest I’m fed up of it go find a new topic to talk about.’

Mario – who welcomed son Parker Jax with fiancée Becky Miesner in November – continued to lash out, as he then Tweeted: ‘You really think you are something special… you are on tv, if you act the way you do, people will have an opinion… my opinion is you aren’t particularly nice.

‘I said hello to you as you walked by as I am polite and you were with people I respect. Grow up & be nice to people.’ 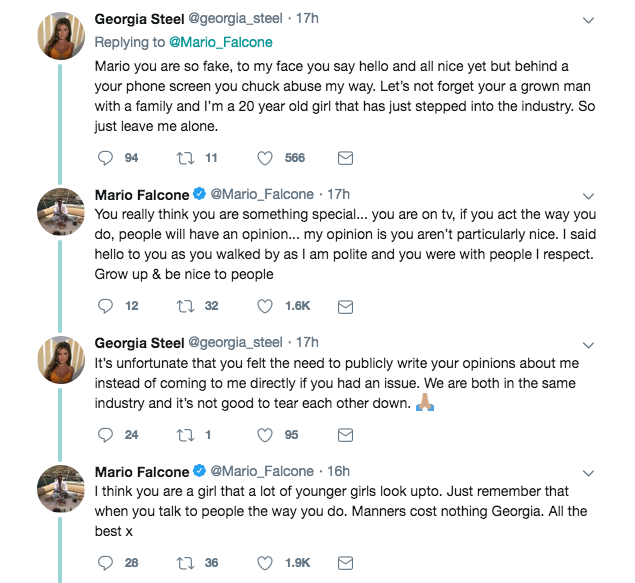 To which the Love Island star quickly replied: ‘It’s unfortunate that you felt the need to publicly write your opinions about me instead of coming to me directly if you had an issue.

‘We are both in the same industry and it’s not good to tear each other down.’

In a bid to end the awkward spat, Mario then finally said: ‘I think you are a girl that a lot of younger girls look upto. Just remember that when you talk to people the way you do. Manners cost nothing Georgia. All the best x.’

Georgia is currently taking part in sixth series of Celebs Go Dating alongside Mario’s TOWIE pal Pete Wicks as well as the likes of Kerry Katona and Megan McKenna after she split from her Love Island boyfriend Sam Bird last year.