She looked absolutely gorgeous in the monochrome look

Emily Andre totally pulled it out of the bag earlier this week with the gorgeous outfit she wore to a Buckingham Palace reception.

Peter Andre and his wife headed to the palace for a glitzy garden party on Wednesday, to join the royals and a few other celebrities in supporting the armed forces.

And for her all-important outfit, doctor Emily didn’t actually decide on a designer option.

No, instead, the 28-year-old chose a stunning black and white spotted pencil dress, from none other than ASOS! 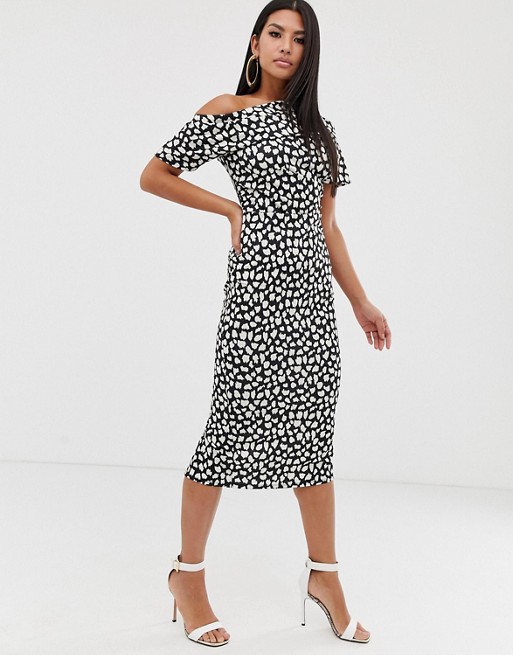 The pick is super affordable, and will set you back just £38, if you fancy purchasing it for yourself.

Unfortunately however, Emily’s dress has proven SO popular, that it’s selling out very fast. At the time of writing, the only sizes left available were a size 6, size 8, and size 18.

But, there’s every chance that ASOS may decide to re-stock Emily’s dress, so keep your eyes peeled! See it on the ASOS website HERE.

More: Peter Andre and wife Emily look as in love as ever after Buckingham Palace trip

Emily teamed her monochrome dress with a pair of nude high heels and a matching pale pink fascinator, for the sunny day at the palace.

The outing was actually the pair’s second day of the week at Buckingham Palace!

Emily and Pete also visited the royal residence on Wednesday too, where they joined the Earl and Countess of Wessex to present gold Duke of Edinburgh awards to young people from across the country.

The most recent visit to the palace was to attend the Not Forgotten Association Garden Party, which is a charity that supports wounded military and ex-military men and women.

In a post on his Instagram, Pete revealed what an honour it was to attend the event.

He said, ‘So privileged to support our armed forces today at Buckingham Palace. Emily and I feel so lucky to be invited to these things and we thank everybody. Loved meeting so many of you aged from 104 down to early 20s. You are heroes #nfassociation’.