The presenter made his views clear...

On today’s episode of This Morning presenter Phillip Schofield weighed in on the race row circulating over Stacey Dooley’s recent trip to Africa with Comic Relief. 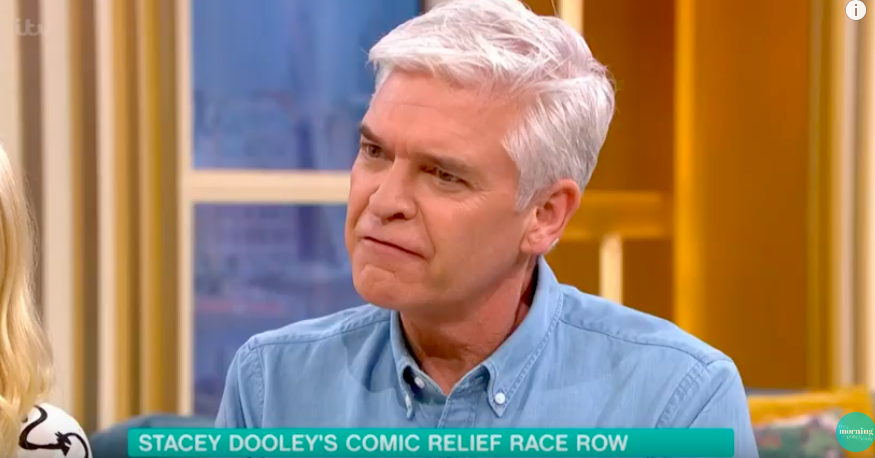 The silver fox and co-host Holly Willoughby were joined by Vanessa Feltz and Dr. Ranj for a discussion on the topic, which has seen former Strictly star Stacey branded a ‘white saviour’ by MP David Lammy, after she posted a picture of herself smiling while holding a black child.

More: THIS hilarious clip of This Morning’s Holly Willoughby and Phillip Schofield voted funniest TV moment of the decade…

David hit out at Stacey, saying: ‘The world does not need any more white saviours. As I’ve said before, this just perpetuates tired and unhelpful stereotypes.’

After listening to Vanessa and Ranj’s views on This Morning, Phillip opened up about his own thoughts on the matter, explaining his view that race shouldn’t even come in to charity work.

And things only got more heated, when Holly and Phil took a call from MP David Lammy himself, to clarify his thoughts on the situation.

He explained that he took issue with how Comic Relief went about their work for important causes, questioning why ‘white heroines’ are sent out on ‘expensive flights’ to help, instead of influential Africans.

David said: ‘Let’s just be clear, there is obviously a role for charity, and one celebrates people doing good causes particularly in Africa. But there are big questions about how it is done.

‘The form of Comic Relief sending out celebrities on expensive flights, beautiful white heroines with a black baby…who looks helpless, with no agency, no parents around, she is there as a white saviour.’

He went on: ‘It is a story that is now hundreds of years old and it’s precisely what keeps Africa poor.’

Phil then continued to ask David another question, but things got super tense when the MP insisted he still had things to say.

Becoming frustrated, Philip appeared ready to hit back, before letting the MP continue with his explanation.

The MP went on, saying: ‘You could have had some Africans talking about their country instead. You could go to Africa’s comedians. You could film part of the night in the continent in Africa.

‘Unfortunately, Stacey Dooley has ran into the same criticism as the likes of Ed Sheeran and Madonna.’

Phillip also confronted David about his own involvement with Comic Relief, asking him why he declined to help with their charity work if he was so affronted by Stacey’s role.

‘I don’t want to be part of their PR machine, I said let’s wait and see what this years Comic Relief is like.’

The This Morning presenter took issue with his train of thought, hitting back saying: ‘Why wait? Would that be great for you as an intelligent, influential black man to have [helped] change it?’