She has a younger named sister Solange who is also a singer.

She also attended the High School For The Performing And Visual Arts and later Alief Elsik High School.

As the lead vocalist of the R&B group Destiny’s Child, Beyoncé captured the public’s eye from the age of 16.

After signing to Columbia in 1997 and releasing four studio albums, Destiny’s Child became the best-selling female group of all time.

In 2001, the band allowed themselves a break to pursue individual solo careers.

Beyoncé Knowles had already landed an acting role in MTV drama Carmen: A Hip Hopera, but it was her part in 2002’s Austin Powers In Goldmember that made her a Hollywood star.

Her first solo album Dangerously In Love was released in 2003.

Following the disbandment of Destiny’s Child the previous year, in 2006 Beyoncé released second album B’Day and earned a Golden Globe nomination for her performance in Dreamgirls.

In 2008, she married rapper and music mogul Jay-Z in a small private ceremony in New York City.

She has since released three more chart-topping albums and earned a total of 17 Grammy Awards.

Beyoncé decided to drop her father as her manager in March 2011 following news of his 18-month affair.

At the 2011 MTV Video Music Awards, Beyoncé Knowles announced that she and Jay-Z were expecting their first child. On 7 January 2012 she gave birth to daughter Blue Ivy.

Her feature-length documentary film Life Is But a Dream aired on HBO on 16 February 2013.

In April 2014, Beyoncé and Jay-Z announced their joint On The Run Tour.

Her family made news the following month, when surveillance footage appeared to show her sister Solange attacking Jay-Z in an elevator at the Met Gala.

And nothing proved that more than when they showed up to yesterday’s Golden Globes ceremony. The King and Queen of charts attended this weekend’s Golden Globes awards in both a super understated and absolutely extra style. With Bey nominated for a coveted award for her musical work in The Lion…

Beyonce has been secretly working on getting Destiny’s Child back together 15 years since their last studio album was released – and it’s down to the success of the Spice Girls‘ recent reunion tour. To coincide with the 20th anniversary of Michelle Williams joining the Survivor girlband, Beyonce wants her…

Lets face it, Kim Kardashian and Beyoncé Knowles are pretty stylish women and during her latest pregnancy, Beyoncé looked incredible. But some fans are noticing that Bey might be imitating Kim’s post baby body fashion and even wearing the same dress as her. This can’t be true… Can it!? In her…

Beyoncé and hubby Jay-Z welcomed twins Rumi and Sir Carter into the world a mere eight weeks ago. But this lady has clearly bounced back to her former shape in no time as she shared amazing pics of her post baby body. READ MORE CELEB NEWS READ: Takeaway responds as…

Beyonce just never stops giving, does she? And now, she’s proved that she’s one of the best, most socially responsible artists around. And an absolute queen. To mark the first anniversary of her groundbreaking album Lemonade, she’s announced that she’s going to fund four women’s college studies. Beyonce’s Formation programme…

Beyonce totally proved why she’s called Queen B last night after avoiding a catastrophe during her Super Bowl 50 half time show performance. The 34-year-old star not only looked fierce AND totally killed it when she burst onto the stage singing new track Formation but she also managed NOT to…

Another day, another rumour of one of our power couples splitting. Whether it’s Posh and Becks or Beyonce and Jay-Z, no-one is safe from that pesky rumour mill. Related: LISTEN to Beyonce’s new song with Naughty Boy! READ MORE CELEBRITY NEWS But fear not! Beyonce’s laughing off ANY whispers of…

SOUND THE SIRENS – new Beyonce music has been bestowed upon us! Last night, producer and centre of all Zayn Malik drama of late, Naughty Boy, posted a little teaser of the upcoming song that he’s been working on with the one and only Queen herself. With a short video…

Was the theme for this year's Met Ball 'dress as naked as possible'?

Dum dum da dum! Which celebrity bridesmaid gets your vote?

These adorable quotes from celebs like Kim Kardashian about their fabulous mum's will melt your heart!

Crunch, pump and get jumping! This is how Beyonce really keeps her body looking uh-mazing

Say it isn't so! Could Beyonce be HUMAN?!

The Lady Mary actress has met some famous admirers

Look away Kanye West - Taylor Swift and Beyonce are best buddies after you hijacked that MTV Award! 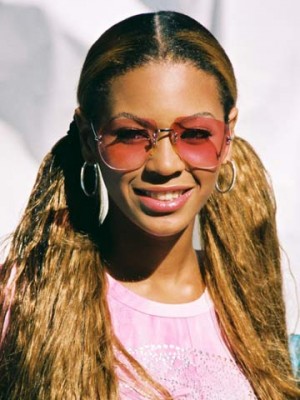 From dark brown curls to sleek blonde locks, Beyonce is always changing her 'do...

Toddlers in bikinis and leather skirts? No, Beyonce and Kim K, just no

Beyonce, Jay-Z and David Beckham chew the fat at a footie match - Kimye will see red for defo

Turning your average Wednesday into a Winsday with our discount code!

Can Beyonce Knowles hold it together on tour?

Singer has loved performing with her man

Singer appears to get emotional

The singer loves her family