Caitlyn Jenner was born as Bruce Jenner in 1949 to dad William and mum Esther. She has two sisters, Lisa and Pam.

Sadly younger brother Burt was killed in a car accident in 1976.

As Bruce Jenner, Caitlyn struggled with dyslexia whilst attending Sleepy Hollow High School and Newtown High School. The youngster developed an interest in sports and went on to pursue decathlon.

During the early 1970s Caitlyn worked selling insurance at night and trained for her sport in the daytime.

The hard work paid off as she went on to win a gold medal in the decathlon at the 1976 Summer Olympics in Montreal, Canada and also beat the world record for the most points scored in the event. It propelled her to stardom and she became a national hero.

Things were also going well in her personal life. She and first wife Chrystie Crownover had two children – a son called Burt and a daughter named Casey. Sadly the couple split in 1981.

After her sporting success Caitlyn – then still known as Bruce Jenner – focused on a celebrity career.

In the 1980s she pursued acting and married again when she tied the knot with Linda Thompson in 1981, with whom she had sons Brandon and Brody. Caitlyn and Linda broke up in 1986.

During the 1990s and 2000s the sports star appeared on various reality shows. She and third wife Kris Jenner – who she wed in 1991 – had daughters Kendall and Kylie together.

The family were catapulted into the spotlight when their reality show Keeping Up With The Kardashians hit screens in 2007. It proved a huge success and made the clan famous across the globe.

Caitlyn and Kris confirmed they’d separated in 2013 and their divorce was finalised two years later.

Many fans noticed Caitlyn’s changing appearance as Bruce in the 2010s, as she had started experimenting with longer hair and nails as well as having surgery to flatten the Adam’s apple.

Following much speculation, the reality star confirmed during an emotional interview with Diane Sawyer in April 2015 that she identified as a woman and would be transitioning.

Caitlyn Jenner made her debut in a glamorous photoshoot for Vanity Fair in June 2015 and received a huge outpouring of support.

The world was sent into a frenzy earlier this month as Caitlyn Jenner ­ formerly known as Bruce introduced herself on the cover of Vanity Fair magazine. With messages of support flooding in from the Kardashian family and celebrity friends, Bruce has finally bowed out of the public eye as… 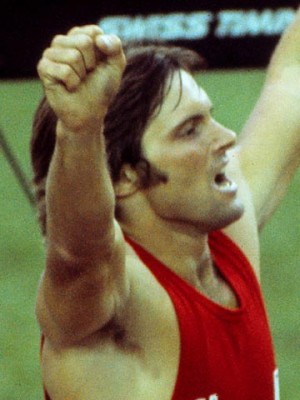 See how the reality star has transformed over the years...

Bruce Jenner has finally introduced the new name she would like to be known as – in her first photoshoot as a woman for Vanity Fair magazine. Say hello to Caitlyn. In an exclusive photoshoot, taken at her Malibu home, Caitlyn reveals she felt she had to make the brave…

Kim Kardashian has been a constant support through Bruce’s journey

After his emotional Diane Sawyer interview, Bruce Jenner will continue to share his 'intimate' story on screen

Want to show your support for Bruce Jenner? Here's how! #PaintYourNailsForBruce

Kris Jenner is said to have opened up about Bruce Jenner ‘becoming a woman.' Shock! She knew nothing about it

The ‘momager’ of the Kardashians, Kris Jenner, is no stranger to off-screen drama

Has Kim Kardashian hinted the Bruce Jenner sex change rumours might be true?

Kim Kardashian's step-dad Bruce Jenner reportedly wants to become a woman named Brigitte, and finally feels free to do so now he has split from Kris Jenner

The couple mark 23 years of marriage

The model has fun at Coachella

Reality star enjoys a trip out