Cristiano Ronaldo was born to Maria Dolores dos Santos Aveiro and José Dinis Aveiro in the neighbourhood of Santo António in Funchal, Madeira in 1985.

His mother was a cook and his father worked as a municipal gardener. He has an older brother named Hugo and two older sisters, Elma and Liliana Cátia.

Cristiano was given the second name Ronaldo as his dad’s favourite actor at the time of his birth was then-US president Ronald Reagan.

The star grew up Catholic. He’s said that his family was very poor and he shared a bedroom with his siblings. He had ‘no toys’ and received ‘no Christmas presents’.

Cristiano was expelled from school after throwing a chair at a teacher. Luckily, it was already clear that he was set for football stardom.

Following a stint at amateur team CF Andorinha as a youngster – where his dad was the kit man – Cristiano joined his local club CD Nacional in 1995.

He enjoyed a successful youth career at Portugal’s Sporting CP but hit the big time in 2003 when he signed to Manchester United for £12.24 million.

Despite being dubbed ‘the best player in the world’ while at Man U, Cristiano’s career hasn’t gone without a hitch.

He was given a red card and a three-match ban in 2007 after headbutting Portsmouth FC’s Richard Hughes. Cristiano said he ‘learned a lot’ from the incident.

Away from the pitch, Cristiano was dealt a devastating blow when his father died at the age of 52 in 2005. A month later, the star was arrested on suspicion of rape.

He denied the allegations and the charges were dropped due to insufficient evidence.

He has full custody of his son and has never revealed the identity of the mother, who chose to stay anonymous.

Cristiano has modelled for companies including Emporio Armani and Nike.

In 2006, he opened a fashion boutique called CR7 in Madeira. He later expanded the business with a store in Lisbon and an underwear range, which was followed by more clothing collections.

A museum dedicated to Cristiano opened in Funchal in 2013. He released his autobiography Moments in 2007.

Cristiano Ronaldo has revealed on social media that he’s become a dad for the fourth time after welcoming his first child with girlfriend Georgina Rodriguez. The Real Madrid footballer took to Instagram to share the lovely news with fans, posting a cute snap of himself, new mum Georgina, and his…

After weeks of speculation Cristiano Ronaldo has confirmed that his girlfriend Georgina Rodriguez is pregnant with his fourth child! The footballer let the cat out of the bag when he was quizzed by Spanish news outlet El Mondo this week about whether he was ‘happy’ to have another baby on…

Cristiano Ronaldo has introduced his adorable baby twins to the world after confirming he’s become a father for the second time. The football star shared a cute photo of himself holding the new arrivals via Instagram on Thursday and admitted he was completely smitten with them. READ MORE CELEB NEWS…

The Euro 2016 is over and who is taking all the glory for Portugal winning? Cristiano Ronaldo of course! Despite coming off the pitch with an injury shortly after the game began, the most-preened footballer in the world made sure the lime light was him during and after the game. READ…

Whilst England have just about scraped through to the knockout stage of Euro 2016 (which is happening right now, in case you didn’t know), Cristiano Ronaldo‘s team, Portugal, have yet to go through after a couple of lacklustre performances. MORE: Emmerdale star Gemma Atkinson reveals EXACTLY what dating Cristiano Ronaldo…

A bit like the whole ‘what came first, the chicken or the egg’ thing, we’ve kinda always wanted to know what it’s like to date the chunk of hunk that is Cristiano Ronaldo.   Is he a Jägerbomb down Yates’ kinda fella’ or more of a winer and diner? What type of footwear does he…

There’s always furious speculation surrounding the love life of Cristiano Ronaldo (AKA the world’s highest paid footballer) but it looks as though he may have found happiness with a surprising star – Made In Chelsea alum Chloe Green. The Topshop heiress – her dad is high street mogul Sir Phillip Green…

If we’re entirely honest, there aren’t many things in life that make us drop everything in the name of an ‘AWWWW’. It’s a very selective list. Puppies? Yes. Doughnuts in the discount aisle of Sainsburys? Yes. Cristiano Ronaldo and his ridiculously adorable son? YES. So when we caught wind of the…

He’s heralded as one of the greatest footballers in the world so it seems fitting that Cristiano Ronaldo lives in a VERY swish house. The 30-year-old has given fans a glimpse into his private life by filming a video tour of his £4.8 million mansion in Madrid and, trust us,…

Football megastar Cristiano Ronaldo has allowed a very rare insight into his private life, bringing with it a tale of childhood heartbreak and a very admirable stance on his fatherhood. In a new documentary about the 30-year-old, titled Ronaldo, Cristiano reveals his father sadly suffered a drinking problem throughout his…

Hot men or cute babies…we’re not sure which one we love more! Thankfully, we don’t have to choose, all thanks to footballer Cristiano Ronaldo, who’s provided us with both in one pic. Cheers Cristy. Related: Ermm…what was Cristiano doing in this video game?! READ MORE CELEBRITY NEWS The 30-year-old Portuguese…

For most of us, buying a wedding gift consists of a quick trip to John Lewis where we inevitably spend hours weighing up the pros and cons of a shiny set of steak knives versus a Cath Kidston tea cosy, before finally settling on a gift voucher so the happy couple can ‘get…

Cristiano Ronaldo – what a lovely prankster. We reported last week on him dressing up as a homeless man, with the help of a false beard and some padding, and taking to the streets of Madrid to show off with a football and generally spread some love. But now, just mere…

Cristiano Ronaldo has managed to pull off possibly one of the greatest undercover stunts ever – and with one of the cutest outcomes too. The 30-year-old footballer made himself unrecognisable to the public by dressing in disguise as a homeless man and heading out in Madrid city centre for a…

Cristiano Ronaldo has posted a half naked picture – but can you see what's wrong with it? 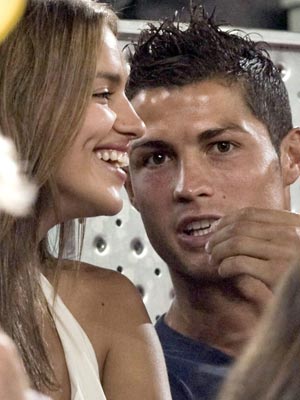 See how the hot couple's relationship has progressed...

Irina shows her love for her man

Cristiano gets a new 'do

The couple strip off for Vogue España

The footballer has shaped his brows

Pair step out together in Madrid

Model has an amazing body 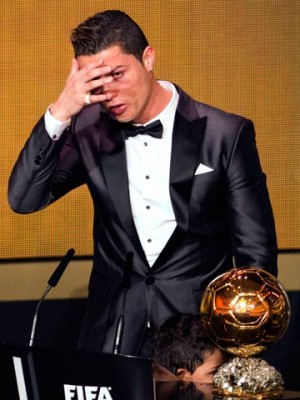 The footballer has designed his own collection