Danielle Peazer was born to parents Jon and Pat in London in 1988. She has a sister named Sarah.

Danielle started dancing after her mum enrolled her in classes as a child. She began her professional career at the age of 16.

After graduating from the English National Ballet School, Danielle continued to train before landing her first commercial job dancing for Leona Lewis at the 2008 Brit Awards.

She’s since built up an impressive CV, performing with stars including Kylie Minogue, Justin Timberlake, Katy Perry and Jessie J.

Aside from ballet, Danielle is also skilled in dance forms including tap, modern, hip hop and jazz.

Despite already having a very successful career, Danielle Peazer was thrust further into the limelight when she appeared as a backing dancer on The X Factor in 2010.

On the show, Danielle met One Direction singer Liam Payne. The pair hit it off and were reported to have been spotted ‘snogging’.

Danielle and Liam fell for each other and started a serious long-term relationship. They moved in together and adopted a cute dog called Loki.

Pretty Danielle often joined Liam on tour around the world and became good friends with his older sisters Ruth and Nicola.

The couple shocked fans when they briefly ended things in 2012. They reunited a few months later but separated for good in May 2013.

A representative said the break-up was ‘amicable’ and Danielle continued to support 1D on her Twitter page.

Danielle carried on dancing after her split from Liam, showing off her moves at events such as Glasgow’s Commonwealth Games 2014 and performing alongside musicians including Union J.

She’s also created a fashion blog called Idle Lane, on which she tells fans where she’s bought her clothes from and what beauty products she’s wearing.

Danielle Peazer launched a YouTube channel based on fitness and dance in 2014.

The pretty brunette’s profile has sky-rocketed and she’s hooked up with companies including Claire’s and appeared in campaigns for charities such as Jeans For Genes.

It’s always great to see talent and hard work rewarded – and for Danielle Peazer, it’s the perfect time for her to announce a new, major accomplishment. Danielle, a dancer who previously dated One Direction’s Liam Payne, has revealed that she’s now a part of a new nationwide beauty campaign, with the likes of Holly Willoughby…

Danielle Peazer has broken her silence on ex-boyfriend Liam Payne’s relationship with Cheryl and her reaction might not be what you’d expect. Whilst most of the population were totally taken by surprise when news of the Chiam romance emerged in February, Liam’s former girlfriend wasn’t quite as stunned by it.…

We caught up with Danielle Peazer, 27, to find out exactly how she maintains her killer body! DANIELLE’S STATS: HEIGHT: 5ft 7in WEIGHT: ‘I don’t know’ DRESS SIZE: 8 Hey Danielle! What’s your favourite workout? I love doing squats, they work both your legs and bum which is always good…

Being friends with an ex can be a difficult task – especially if your former flame happens to be part of the most famous boyband in the world (in case there’s any confusion, we mean One Direction, by the way). But Danielle Peazer, ex-girlfriend of Liam Payne, seems to be…

She’s the international fitness blogger and dancer who’s worked with the likes of (deep breath) Jessie J, Katy Perry, Kylie Minogue, Justin Timberlake, Ellie Goulding, Taio Cruz. She’s got a mahoosive one million people following her every move on Instagram, and a whopping 3.11 million Twitter followers. Wowzers! Not to…

WHAT REALLY GOES ON AT LONDON FASHION WEEK? Now's GlamCam secret squirrels you backstage to show you what it looks like to be a celebrity fashionista like Michelle Keegan on the front row... 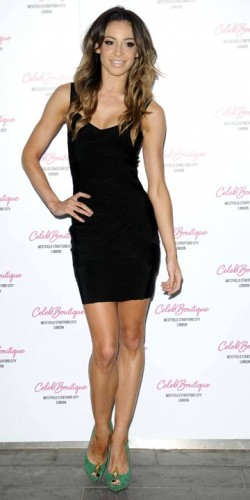 The dancer accessorises with temporary ink

The dancer has an amazingly toned tum

Danielle Peazer is so much more than just Liam Payne's ex

Danielle and Michelle have struck up a friendship

Danielle Peazer enjoys chatting about what she likes

The girls party together

Dancer has an impressive body

Danielle is complimented by actress Michelle

Dating a celebrity is all well and good but what happens when it ends?