Eleanor Calder was born in London in 1992. She’s an only child.

After attending St. Marylebone School, Eleanor headed to the University Of Manchester to study politics and sociology.

While a student, she took a job as a floor model at fashion store Hollister.

Eleanor Calder entered the limelight when she fell for One Direction singer Louis Tomlinson in 2011. Their anniversary is on 17 November.

She’s been described as a ‘female version of Louis’.

Hooking up with Louis just before the release of 1D’s first album, Eleanor has supported her man throughout his stratospheric rise to worldwide fame.

She often accompanies Louis on tour and has been spotted with him in cities including New York and Melbourne.

Eleanor’s also joined Louis at events such as the 2012 MTV VMAs and the London premiere of One Direction’s 3D documentary film This Is Us in 2013.

Louis has returned the favour by visiting his girl at university and flying back from his group’s Where We Are tour to attend her graduation in 2014.

Since hooking up with Louis, Eleanor Calder has become a style icon amongst Directioners. There are a number of blogs on the internet that focus on her fashion.

However, she’s also had to deal with cruel messages and death threats on her Twitter page. In 2012, Louis raged about being ‘very p*ssed off’ that Eleanor had been sent pictures of his ex-girlfriend Hannah Walker.

A very vocal group of Directioners – named Larry Shippers – are obsessed with an imagined romance between Louis and his bandmate Harry Styles, which they call Larry Stylinson.

Both Louis and Eleanor have dismissed the rumours, with Eleanor Tweeting to a believer in 2012 that they were ‘deluded’.

Luckily, the loved-up pair have stayed strong through the tough times.

Although the pair had busy schedules, they both appeared to make time to see each other. Louis opened up about how he and Eleanor keep their long-distance relationship going in January 2014.

‘It’s definitely doable, it’s down to the people and whether they want to make it work enough,’ he said. Louis even flew back from 1D’s Where We Are stadium tour to watch Eleanor graduate from university in July 2014. Eleanor was maid of honor at mum Johannah Poulston’s wedding to boyfriend Dan Deakin. Louis was one of two best men.

The pair were last spotted on February 13th in Australia taking a walk along the beach as Eleanor came to meet Louis during the last leg of their tour.

News of their split emerged in March 2015.

After an emotional few months, Louis Tomlinson is gearing up to release his second solo single and it’s certainly got some powerful lyrics. In new track Back To You the 25-year-old seems to reflect on a turbulent relationship, leading to speculation about whether the tune could be about his recently…

Louis Tomlinson has had a rough few months and now it looks like he’s turned to an old flame for comfort. The One Direction star is said to be back in touch with ex-girlfriend Eleanor Calder after he started following her again on Instagram, almost two years since they split.…

Zayn Malik has sent fans into a frenzy after following Louis Tomlinson’s ex girlfriend, Eleanor Calder, on Twitter. READ MORE CELEBRITY NEWS & GOSSIP! The 23-year-old’s unexpected social media move comes just one week after Eleanor exclusively gushed about him during an exclusive chat with Now. After posting a Snapchat…

In the past 24 hours I’ve been branded a ‘liar’ and ‘prick’ by Eleanor Calder, an angry former flame of a One Direction‘s Louis Tomlinson, in front of an audience of millions. But the problem with being called a ‘liar’ is that it implies you’ve made something up. ‘Nice to…

This week we were all left a little shocked by the news that Louis Tomlinson, 23, is going to be a dad. After recently splitting from his girlfriend of four years Eleanor Calder, 22,  in March it seems that the 1D star has moved pretty quickly with new flame personal…

The biggest flirt in Chelsea Jamie Laing says: 'Falling in love is the only thing you need'...aww

Eleanor's piece looks VERY similar to one Louis once sported

Louis Tomlinson has been keeping himself occupied

I reckon Louis and Eleanor are better off single

The One Direction singer announced his break-up last weekend

After Zayn Malik's worrying dash home, the group are under alot of pressure with the One Direction tour

One Direction girlfriend Eleanor is FINALLY back on social media 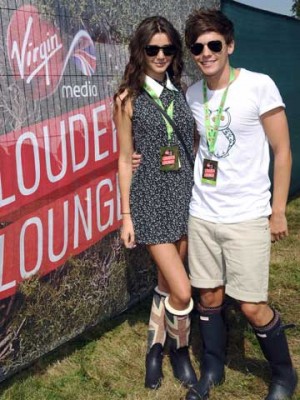 See how the couple's relationship has progressed

Pair spend time together in the States

The girls are having fun in the States

Eleanor has almost finished her degree

The couple look smitten on the slopes

Magdalena Szablinska collapses near her school