Long before she shot to fame in the raunchy video for Robin Thicke’s Blurred Lines, Emily Ratajkowski was born to American parents in London in 1991.

Her mum Kathleen was an English professor teaching at Fulbright and her dad John was a painter and art teacher.

Throughout her childhood Emily travelled a lot but mainly grew up in California. She was an only child and the family didn’t have a television.

At the age of 14 Emily started modelling and signed with Ford Models while continuing to attend high school.

She also had minor acting roles, including a two-episode stint in children’s TV show iCarly.

Emily attended the University of California but left after a year to pursue her modelling career. She appeared in campaigns for brands such as Forever 21 and Nordstrom.

The sexy brunette starred in a racy nude photoshoot for Treats! Magazine in 2012 and thinks this was how she got her break.

After the shoot Emily Ratajkowski featured in the video for Maroon 5’s hit Love Somebody before being offered a part in Robin Thicke’s Blurred Lines. She initially turned it down but director Diane Martel persuaded her.

Emily appeared alongside two other models in the footage and danced around Robin, Pharrell Williams and TI in skimpy underwear. An explicit version was also released where she strutted around topless.

The song was a huge hit but the video sparked controversy, with some critics branding it sexist. Emily Ratajkowski has defended the clip, saying it is ‘celebrating women and their bodies’.

After Blurred Lines, Emilywas hailed as a sex symbol and starred in various saucy photoshoots.
She was named as the 4th Sexiest Woman In The World in FHM’s annual chart and also appeared in Maxim’s Hot 100 list.

The model’s acting career has been reignited since Blurred Lines. Emily scooped a role alongside Ben Affleck in the much-anticipated film adaptation of Gillian Flynn’s novel Gone Girl and was also cast as version of herself in the Entourage movie.

She excitedly announced that she’d got her first leading part in August 2014 when she revealed that she’d be starring opposite Zac Efron in coming-of-age flick We Are Your Friends.

Emily Ratajkowski was met with tonnes of applauding comments from fans when she shared an old school photo of her 14-year-old self along with a seriously important message. Taking to Instagram, the sizzling hot model, who is known for posing in skimpy bikinis and showing off her sensational figure on…

Emily Ratajkowski is no stranger to stripping off in the name of a mega hot Instagram shot. But today the stunning model stripped off entirely for a social media update, lounging naked on her sofa in her plush New York City apartment. While the sexy snap isn’t a close up,…

Emily Ratajkowski is no stranger to stripping off for the sake of an Instagram photo, and last night she wowed fans with yet another steamy snap. Wearing nothing but a crisp white underwear set and two simple necklaces, the jaw dropping model posed on her equally white bed sheets for…

Emily Ratajkowski has teased fans with a fully nude photo as she proudly flashes her tan lines. The jet-setting model always appears to be on holiday, and this week it’s been no different as she relaxes in another fabulously sunny location. In her latest hot Instagram offering shared with her…

Emily Ratajkowski has always been a fan of showing some skin – and who can blame her when she’s so flippin’ gorgeous? It goes without saying, then, that the model’s latest holiday snaps on her social media feature lots of pictures of her hitting the beach in a bikini and…

American actress and model Emily Ratajkowski (it’s pronounced Rat-a-kow-ski FYI. You’re welcome) is not exactly shy when it comes to showing off her body on Instagram. But the 25-year-old Gone Girl actress, who shot to fame after appearing in the Blurred Lines video, has outdone herself with her latest pic.…

Kim Kardashian had us all thinking she’d reached her ‘breaking the internet’ peak with THAT naked selfie earlier this month. Well now she’s proved us wrong by doing it all over again in a new photo with model Emily Ratajkowski – where they’re BOTH topless. READ MORE CELEB NEWS Kim…

There’s nothing quite like being reminded you’re old, and this gallery will do two things to you: first you’ll ask ‘THEY’RE 24!’ The answer is yes, they are 24-years-old. But to make it slightly better, the second thing is you’ll question how two celebrities could possibly be the same age.…

Emily Ratajkowski stuns in hot lingerie. We are SOLD

Do NOT watch Gone Girl with your mum and dad like I did! 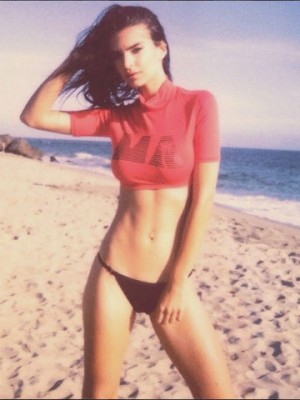 Gone Girl’s very own Emily Ratajkowski spills the beans. Warning: It. Is. Weird.

Sorry Emily Ratajkowski, but is it anything we haven't seen before?

Model strips off for saucy footage

Emily gets ready to star in We Are Your Friends

The model tries a new look

The model has a tasty treat

Model gets close to pal

The hot model gets leading part

The model hangs out on a sofa

The model displays her bum as she goes for a dip

The model shows off her decorated talons