Jessica Wright, often known as Jess, was born to parents Carol and Mark Wright Senior in Essex in 1985. She is the elder sister of Mark Wright and also has another brother, Josh, and sister, Natalya.

The Essex girl attended Bancroft’s School in Woodford Green and went on to get a degree in Business and Marketing Management but she always loved to sing.

After working in an office, Jessica left to pursue a music career with girl group Lola. Mark helped to promote the band.

In 2010 Jessica Wright got her break when she joined the cast of ITV2 reality show The Only Way Is Essex.

Several members of her family, including Mark, her parents and her grandmother Nanny Pat, starred alongside her.

The series was a huge hit and Jessica remained on the show after Mark’s exit at the end of series 3.

The TOWIE babe hasn’t given up on her desire to sing. She released her debut solo song Dance All Night in 2012 and it charted at No 36 in the UK Singles Chart.

Her next single Dominoes failed to make the Top 100. Dance track Come With Me came out in the summer of 2013.

Despite her confident exterior, Jessica revealed in 2014 that she has struggled with anxiety and panic attacks after being in a car crash when she was 20.

Former TOWIE star Jess Wright has finally unveiled her hunky new man! Jess shared the first picture of businessman boyfriend William Lee-Kemp on Monday and it was soon flooded with sweet comments from friends and family, who are clearly thrilled to see her all loved-up again. In the snap, William’s…

Reality TV stars Jessica Wright and Olivia Attwood braved the cold and windy weather today to attend the 50th annual Television and Radio Industries (TRIC) Awards. The pair clearly weren’t phased by the wet weather, as they took to the red carpet at London’s Grosvenor House baring their tanned, toned…

Since quitting TOWIE last year, it looks like reality star Jess Wright has been spending her spare time in the gym as she’s shown off her incredible fitness transformation. While we think the Essex beauty has always had an amazing figure, Jess has recently gained some rock hard abs and is…

As a successful presenter and telly personality, it’s hard to believe Mark Wright started out his career causing drama amongst practically ALL of the female cast of TOWIE. Flash forward six years and he’s married to one of the most beautiful women on the planet aka. Michelle Keegan and hosting…

Jessica Wright has furiously hit out at body-shamers over ‘unflattering’ pictures of her in a bikini which emerged this week. Photos published this week showed the former TOWIE star displaying her curves in a two-piece during a break in Los Angeles and she’s upset that the snaps have been splashed…

We imagine that Jessica Wright spent hours getting herself all dolled up on Wednesday night for the launch of her latest shoe collection – but that didn’t stop her fans focussing on one apparent flaw with her glam look. MORE: Is Jessica Wright joining I’m A Celebrity ‘to show the real…

Jessica Wright has just dropped a huge hint that she’s heading for the I’m A Celebrity jungle. The TV star, who bowed out of TOWIE back in February, is hoping to show who she really is on another telly programme and fancies her chances down under. READ MORE CELEB NEWS…

Whilst it’s currently raining outside our window, these TOWIE babes are living it up in Ibiza! Could we be any more jealous? It seems like Chloe Lewis and Jess Wright have taken to the skies and escaped the miserable UK weather for some glorious sun! 8 things Queen Elizabeth has…

TOWIE lady Jessica Wright, 30, reveals how she stays in such good shape! JESS’ STATS: HEIGHT: 5ft 6in WEIGHT: ‘I don’t want to tell you!’ DRESS SIZE: 8-10 What’s your favourite way to keep fit? ‘I train with a personal trainer. I really feel like they push me more and…

We’ve always known that TOWIE‘s Pete Wicks was a treat for the eyes, but it’s been further confirmed with his latest Instagram post. The Essex fella took to social media on Wednesday evening and shared a photo of himself topless and errrr, wet. In fact, we’re guessing Pete is enjoying…

It looks like Jessica Wright and Pete ‘Pirate’ Wicks might finally be getting together on TOWIE – after several series’ worth of flirting, and one initial round of failed dating. So we’ve put together just why they make the PERFECT couple. Because they do, and we’re all made up for…

The TOWIE cast are no strangers to plastic surgery, but Jessica Wright has revealed in a new interview that she’s ‘categorically never had’ lip fillers. Oo-er. The brunette has been snapped over the years showing fuller looking lips but put the rumours to rest in an interview with Hello.co.uk where…

It’s official – Jessica Wright isn’t afraid of hard graft. Not content with designing sell-out shoe collections, knock out dresses, jewellery ranges and even accessories, Jess has even just released her first book which is all about – you guessed it – fashion. Do Jessica Wright’s high heels ever touch…

We all know the residents of Essex love a good party and it seems that almost all the TOWIE stars were on hand to help Jessica Wright celebrate her 30th birthday at the weekend. Jessica’s sister in law Michelle Keegan joined the likes of Ferne McCann, Danielle Armstrong and Lydia…

Jessica Wright has been a much-loved member of the TOWIE cast right from the beginning but is she about to swap Essex for Hollywood? The 30-year-old reality star totally looks ready for the big screen after undergoing a dramatic makeover to celebrate the release of new flick The Transporter Refuelled…

They say you can’t truly understand someone until you’ve walked a mile in their shoes – which means we’re about to get to know TOWIE’s Jessica Wright pretty darn well, as she’s just released her very own range of footwear! Jess unveiled her debut shoe collection today, showing off her Autumn/Winter 2015… 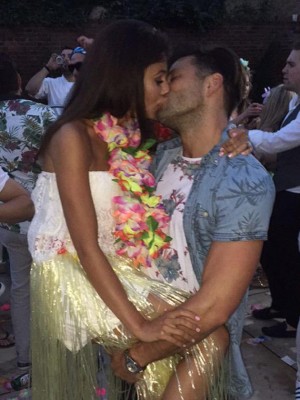 We’re desperate to see Jess Wright find her own Mr Right and it looks like she is too. During a wild Hawaiian-themed party thrown by her brother Mark Wright and new sister-in-law Michelle Keegan at the weekend, she caught the newlyweds enjoying a cute off-guard moment, puckering up and snogging each…

Just hours after Mark Wright treated us to some private photos from his wedding to Michelle Keegan, Jessica Wright has gone and shared even MORE pics – yay! The 29-year-old TOWIE star acted as one of new sister-in-law Michelle’s bridesmaids for the nuptials – held at St Mary’s Church in…

Since Jessica Wright’s bitter split with Ricky Rayment was played out for all to see on TOWIE in November, Jess hasn’t looked back. Looking as glamorous as ever as she stepped out last week at the Magic Mike XXL premiere, Jess appeared unfazed by the news that Ricky, 24, had…

Michelle Keegan and Mark Wright only tied the knot a couple of weeks ago but there’s already baby talk happening amongst their family members! Mark’s sister Jessica Wright has been speaking about her brother’s fairytale romance with new wife Michelle and sounds excited by the prospect of them having kids…

They were together for two and a half years before splitting up seven months ago, but it seems there’s still a whole lottta bad blood between TOWIE’s Jessica Wright and Ricky Rayment. Speaking in an interview with the Sun on Sunday’s Fabulous magazine, she said: ‘I don’t even know if…

It was the Alton Towers ride that everyone wanted to go on. The Smiler promised thrill-seekers the opportunity to be turned upside down 14 times as part of its record-breaking experience. But the Staffordshire theme park is now being investigated after four rollercoaster riders – three of them teenagers –…

Jess knows JUST what she wants to buy her future daughter

It seems even TOWIE can't capture all the drama! We've got the latest on the show's hottest new couple Jess Wright and Dan Edgar