Matt Willis was born in London in 1983. He has an older brother, Darren, and a half-sister called Amanda.

The singer attended the Sylvia Young Theatre School in west London and had ambitions to be an actor.

After brief appearances in The Bill and Casualty, Matt found fame with boy band Busted in 2002.

The group’s debut single What I Go To School For was a top 10 hit in the UK Singles Chart. They had their first No 1 with You Said No in 2003.

Busted released two albums and had a total of four No 1 hits. They also scooped two Brit Awards in 2004 before splitting in 2005 when Charlie Simpson decided to leave the band.

Matt Willis sought treatment for alcoholism after the break-up by checking into The Priory. After his rehab stint he embarked on a brief solo career.

His biggest hit was debut track Up All Night which was released in May 2006. In the same year, Matt returned to rehab for his cannabis addiction.

Matt entered the jungle as a contestant on I’m A Celebrity… Get Me Out Of Here! in November 2006 and went on to win the show.

After his success Matt did presenting work and co-hosted spin-off show I’m A Celebrity… Get Me Out Of Here! NOW! with girlfriend Emma Griffiths in 2007 and 2008.

Matt Willis branched out into theatre work in 2010. He has starred in shows such as Flashdance The Musical, Wicked and The West End Men.

2013 was a big year for Matt. It was announced in November that Matt and his Busted bandmate James Bourne would form supergroup McBusted with McFly.

The lads announced a 2014 tour which proved to be hugely popular with fans.

Matt also landed a stint in EastEnders as Stacey Branning’s boyfriend and starred in comedy Birds Of A Feather.

He was cast in wartime drama Allies as Private Billy Munns.

The Busted singer has opened up in a candid interview...

We’re used to seeing her dolled up as she hosts multiple TV shows and events, but Emma Willis pulled out all the stops to celebrate Halloween with her hubby Matt Willis last night. Donning matching suits, heavy eye make-up and powdered white faces, Emma, 42, and Matt, 35, got into…

Matt Willis has admitted he burned all of the photos from his and Emma Willis‘ wedding because he looked like a ‘wreck head’. The Busted singer has previously battled alcohol and drug addiction and went to rehab twice before he married Celebrity Big Brother presenter Emma. READ MORE CELEBRITY NEWS …

Emma Willis might be in demand these days but she’s revealed how a very rough patch in her career led to husband Matt having to financially support her. The presenter – who married the Busted star in 2008 – has admitted that she struggled to get work during the early…

Emma Willis is fast becoming the queen of live television. She hosted this year’s BRIT Awards with Dermot O’ Leary, and if you switch on to any channel these days she is bound to pop up. But mention Emma’s incredible success to her and she modestly replies, ‘Don’t say that, because…

Matt Willis is famously known for being part of the band Busted, and of course for adorable relationship with wife Emma Willis. So fans were left scratching their heads as the singer went on a very bizarre Twitter rant. READ MORE CELEB NEWS READ: ‘Really?’ Celebrity Big Brother viewers think…

Big Brother‘s Emma Willis and Busted’s Matt Willis are quite literally ‘couple goals’ and they’ve proved it yet again with some ADORABLE pics. The pair who have been married for nine years – which is a lifetime for many showbiz romances – have proved that their marriage is better and…

Emma Willis has been on our screens so much over the past few years, that most of us can’t help feeling as if we know her a little bit like a friend. Funny and personable, the Celebrity Big Brother host seems to have a very happy life with Busted hubby…

Emma Willis and Matt Willis are up there with the UK’s celebrity #powercouples, but it seems even they have irrational worries just like the rest of us as the Big Brother presenter has BANNED her pop-star husband from going on Strictly Come Dancing! It’s prime speculation time for who is…

Massive congratulations are in order for Matt and Emma Willis, on the birth of their third child! According to The Sun, Emma gave birth to a baby girl earlier this week. Already the mother to 6-year-old daughter Isabelle and 4-year-old son Ace, the couple have named the newest addition to the Willis…

Emma Willis has revealed all the details of her THIRD pregnancy – and why she is still head-over-heels with hubby Matt Willis. The pair have been married since 2008 and gone through many trials and tribulations since the start of their relationship. Yet the mum-of-two has revealed why she’s stuck…

Emma Willis is gearing up to give birth to her and husband Matt Willis‘s third baby, with the Celebrity Big Brother star believed to be due in early May. And, as well as shopping for baby grows and dealing with the stress of flatpack baby furniture, Emma and Matt’s minds have naturally…

As we settle in for another month glued to our sofas watching Celebrity Big Brother (YAY!), we decided that it was also a perfect time to take a trip down memory lane to celebrate the romance between CBB host Emma Willis and husband Matt. The incredibly photogenic pair began dating…

Emma Willis is pregnant with her and hubby Matt’s third child – awww. According to reports the 39-year-old presenter will welcome the tot on 8 May next year, which is also Matt’s birthday. Now THAT’S a special present! READ MORE CELEB NEWS Emma Willis reveals who does the housework! The…

Get set to do the biggest air kick ever, because Busted are BACK – all three of them! James Bourne and Matt Willis are reuniting with Charlie Simpson for a 2016 comeback tour and album, and our younger selves are all kinds of excited. MORE! Busted’s Charlie Simpson discusses band reunion: ‘I said I’d never…

The start of Emma and Matt's relationship wasn't easy

Singer can't wait for his children to see McBusted tour

Emma Willis is crazy about her confident husband

Watch out, January! Emma Willis is back and she’s going to be all up in your TV grill hosting not one but two shows

The couple had a rocky early date 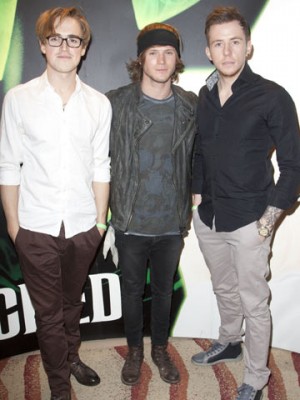 The TV presenter has given birth