Mila Kunis was born in Ukraine to parents Mark and Elvira in 1983. She has an older brother called Michael.

The family left the country for America when Mila was 7 and they settled in Los Angeles. Mila started school unable to speak any English but soon picked it up.

Her mum and dad enrolled her onto an after school acting programme at Beverly Hills Studios when she was 9 and she soon started appearing in TV commercials.

Mila Kunis got her big break at 14 when she landed a role in hit TV comedy That ’70s Show alongside Ashton Kutcher. The series ran until 2006.

In 1999 Mila got another long-running gig when she joined the cast of Family Guy as the voice of teenager Meg.

As well as doing television work, Mila started to make a name for herself in the movie world in the 2000s, with roles in Get Over It and American Psycho II: All American Girl.

The actress started dating former child star Macaulay Culkin in 2002 and they were together for eight years.

After That ’70s Show ended, Mila focused on film and impressed critics with her performances in the likes of Forgetting Sarah Marshall and Max Payne.

The actress returned to her comedy roots in 2011 romcom Friends With Benefits, in which she got very raunchy with co-star Justin Timberlake.

Mila continued to amuse audiences in 2012’s Ted but took on a more family-orientated role in Oz The Great And Powerful the following year.

The pretty brunette has gained a huge fanbase and was crowned Sexiest Woman In The World by FHM in 2013.

The cute couple got engaged in 2014 and Mila confirmed she was pregnant during an appearance on The Ellen DeGeneres Show that May. Daughter Wyatt was born in September 2014.

Ashton Kutcher and Mila Kunis had the perfect response to a story claiming they were set to divorce. A US magazine alleged the married couple had broken up, with its cover declaring ‘It’s over!’ between the two. Firing back at the claims, the couple took to Instagram on Wednesday to…

Seeing as it’s finally December, many folks are looking forward to receive (and giving, of course) lovely festive gifts from their nearest and dearest. But luckily for Mila Kunis and Ashton Kutcher, their big Christmas (and Hanukkah) gift has come early – as they’ve just welcomed their second child together!…

Ashton Kutcher is clearly excited about becoming a dad again – so excited, in fact, that he appears to have accidentally let slip the baby’s sex! Whoops. The actor and wife Mila Kunis are expecting their second child together following the birth of daughter Wyatt in October 2014 and Ashton…

Ashton Kutcher and Mila Kunis have been understandably protective of their daughter since she was born last year – but daddy Ashton may have just given his little girl her Instagram debut in the name of a very good cause. MORE: ‘My feet are swollen!’ – pregnant Kim Kardashian talks cravings, due dates…

Find out the gender of Mila Kunis and Ashton Kutcher's baby, plus why their romance is 16 years in the making 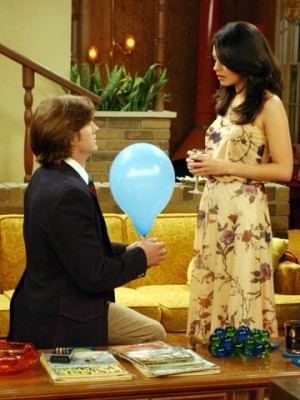 See how the couple's relationship has progressed

Actress grew up with her man

Actress is honest about giving birth

The actress stars as free-spirited Vivian in the series

Was it love at first sight followed by a sixteen-year friendship for Mila Kunis and Ashton Kutcher?

The couple are reportedly getting married

What will Mila Kunis say about Demi Moore getting in touch with her ex?

Ashton gets a trim before Paris trip

The couple may be planning a unique honeymoon

The smitten couple will tour the English countryside

The couple's temporary London pad is in an unfortunate location

Smitten Ashton Kutcher has a romantic surprise for girlfriend Mila

Mila Kunis plays witch Theodora in the new Oz The Great And Powerful...

As Ashton Kutcher and Mila Kunis plan a move to London, his ex-mistress Sara Leal speaks out