Nick Grimshaw was born in Oldham to mum Eileen and dad Peter in 1984. He has an older brother, Andy, and a sister called Jane.

The young Grimmy enjoyed showing off and was prone to being cheeky at school. He went on to study at the University Of Liverpool, where he had a show on student radio.

When he interviewed indie DJ duo Queens Of Noize, Nick was persuaded to move to London after university and he helped to run their club nights.

He interned at MTV and did DJ gigs before getting his break on both TV and radio in 2007.

Nick Grimshaw was signed up as a presenter on e4 and on Channel 4 music show Freshly Squeezed. He also started hosting youth show Sound on BBC Two with Annie Mac.

The duo reunited for BBC Radio 1 show Switch and soon Nick was given solo roles on the station, with slots on the Weekend Breakfast Show and then a late night weekday programme.

His TV career continued to go well and he became a regular face on T4 from 2010.

Nick Grimshaw achieved his childhood dream in July 2012 when it was announced that he would be taking over from Chris Moyles on the Radio 1’s Breakfast Show.

He came out as gay in August 2012 and started presenting the show a month later.

The show has attracted younger listeners and welcomes lots of celeb guests, including many of Nick’s famous pals.

He’s known for his friendships with several stars, including Kate Moss and Harry Styles.

Nick continued to do television work too. In 2013 he started hosting BBC Three panel show Sweat The Small Stuff and also presented on Children In Need.

With a great sense of style, Nick has often been seen at fashion events and has been compere at the ELLE Style Awards.

June 2015 was a successful month for Nick – he unveiled his debut clothing collection for Topman and was announced as a new judge on The X Factor just a couple of weeks later.

In terms of celebrities going off script during live broadcasts, this has been one heck of an eventful week so far. Katie Price kicked off proceedings when she uttered the ‘N-word’ twice on This Morning, and merely a day later she had the torch of using questionable language snatched clean off of…

Harry Styles and Nick Grimshaw have been firm friends for years. The pair have often been photographed partying together with mutual pals. But on his radio show yesterday, Nick gave us a very honest insight into their time together. And we’re shocked. Nick said: ‘I have an exclusive. Harry Styles…

X Factor semi-finalist, Emily Middlemas has hit back at Nick Grimshaw after he called her cover of Britney Spears’ ‘Toxic’ ‘horrible’. Despite the Glaswegian singer making it all the way to the semi-finals, Radio 1 DJ, Nick clearly wasn’t impressed as he told his 2 million followers: ‘I just watched…

Simon Cowell is giving The X Factor a pretty big shake-up this year as yet another big name is set to leave the show. Co-host Olly Murs has announced that he’s leaving, just days after judge Nick Grimshaw confirmed that he’s quit after just one year on the panel –…

Question of the day- who will the King of The X Factor (a.k.a Simon Cowell) appoint as his new judge and host in the wake of  Nick Grimshaw and Caroline Flack‘s departure?! Could it be you? Your cat?! YOUR MUMS CAT?! The possibilities are quite simply endless… And, whilst we hate to be…

If like the rest of us your thoughts at the moment are, ‘urghhhhh it’s really dark, urgghh it’s really cold, urggghhh don’t want to go to the gym, urghhh Storm Gertrude is going to blow me away’, we’ve got the perfect bit of motivation for you. In preperation for Sport…

X Factor judge and radio fave Nick Grimshaw is begging for a place in the Celebrity Big Brother house, saying he absolutely LOVES the famous programme. He interviewed gorge CBB host Emma Willis on his breakfast slot and he wasn’t shy about expressing his love for the reality show. Nick…

Whilst we don’t know how welcome we’d be, we’re certainly wishing that we were on holiday right now with these lucky, lucky celebrities. Because for the most of us winter is a time of multiple jumpers, heated blankets and utter memory loss over what the sun actually is. Warmth? We’ve never heard…

If absolutely anything will warm those winter cockles today, let it be this. For those of you that have been pacing your kitchen/bedroom/local Tesco wondering exactly *what* X Factor mentor Nick Grimshaw and his 19-year-old songbird prodigy Ché Chesterman looked like as lil’ baba’s (because, you know- we sooooo haven’t been…

Nick Grimshaw whipped out the hard-hitting questions on BBC Radio 1 today after asking Cheryl Fernandez-Versini’s own band Reggie ‘N’ Bollie, in front of the Queen of X Factor herself, what they hated about her. Naturally they were hesistant – is there anything bad to say about a human who…

We’re a little bit worried about Harry Styles after he spent the whole of One Direction‘s interview with Nick Grimshaw refusing to talk – choosing instead to communicate via his PHONE. In a video of the interview released by Radio 1, Haz is seen perched on the end of a…

Olly Murs just met his dream girl Jennifer Lawrence on the Nick Grimshaw’s Radio 1 Breakfast  Show – and it led to the most AWKWARD flirting we have ever seen, with Grimmy as wingman! Haha seriously need to go back to flirting school after meeting Miss Lawrence @grimmers @R1Breakfast 😂🙈…

One Direction fans aren’t know for being a shy and retiring bunch so it’s no surprise that Twitter went into meltdown when they were given the opportunity to submit questions for the boys this morning. The hashtag #1dOnGrimmy started trending as Nick Grimshaw asked Directioners to send their queries in…

He’s got more famous friends than we could ever dream of having. But it seems not everyone is desperate to join Nick Grimshaw’s A-list squad. READ MORE CELEBRITY NEWS & GOSSIP! During a video message broadcast at yesterday’s Radio 1 Teen Awards, Peter Andre called out Grimmy, who was on…

Fleur East made one of the greatest returns to The X Factor, like, EVER last night and it seems that the whole showbiz world is still talking about it. In case you didn’t see it, the 28-year-old singer – who finished as a runner-up in the competition last year –…

With his first season as an X Factor judge well under way, it seems that Nick Grimshaw would quite like to get some special souvenirs of his time on the show… We’re not just talking a keyring here, though. Nick, 31, has hinted that he’d quite like to take a…

She may be one of the most famous/photographed/followed people on the planet, but Nick Grimshaw doesn’t have much time for Kim Kardashian. In a new interview, the X Factor judge takes aim at the Keeping Up With The Kardashians star, saying the fact that she’s so adored ‘blows his mind’ –… 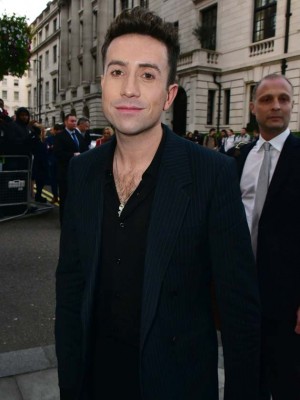 As if we didn’t love Nick Grimshaw enough – what with his fabulous style and the cheeky chappy waking us up in the morning on Radio 1 – we love him even more now after he’s candidly spoken about his sexuality. Related: What did Grimmy do when he found Justin…

Rita Ora certainly had quite a night on her first X Factor live show over the weekend. Not only did her act Louisa Johnson become one of the favourites to win thanks to a spectacular performance but Rita also got to appear alongside her dear friend Nick Grimshaw on the…

We bet that the judges on the X Factor have a right ol’ whale of a time on that show – the LOLs, the food fights, the banter…all aboard the the bus to Banterbury! (sorry..) Related: Simon Cowell opens up to why he snapped at Rochelle on the Xtra Factor…

What would you do if you were in possession of the phone of one of the biggest popsters in the world? Related: Erm…you’ll never guess what part of Bieber’s body he’s been offered $1 million for…. READ MORE CELEBRITY NEWS Well, probably not much because of passcodes and all that…

Earlier this week, X Factor contestant Tom Bleasby quit the show after he decided he wasn’t ‘vocally ready’. Related: Is Jessie J the reason Tom decided to quit X Factor? READ MORE CELEBRITY NEWS Since then, we’re all been on ththe edge of our seats – well, not really –…

Following his shock decision to leave The X Factor, there exists a great big hole Tom lyby-shaped hole in Nick Grimshaw‘s boys category ahead of this weekend’s Judges’ Houses stage – and we can’t help wondering who will fill it? Tom shocked everyone by announcing that he’d quit the show yesterday, citing…

We love how much of a family that X Factor gang are. There’s Nick Grimshaw and Rita Ora like of cheeky cousins, and Olly Murs and Caroline Flack are a pair of silly siblings if we ever did see one. Related: Is Simon Cowell trying to set Caroline up with…

Nick Grimshaw has been keeping quiet about his rumoured romance with photographer Michael Mayren but there’s no denying that they’re close now that Michael has become besties with Nick’s DOG. READ MORE CELEB NEWS Nick Grimshaw’s X Factor transformation Yep, the ultimate seal of approval in any relationship is that…

When the Beckham kids are naughty, it’s not David Beckham who dishes out the discipline. Instead, it’s Victoria who keeps things in order. While speaking to Nick Grimshaw on his Radio 1 Breakfast Show, David revealed that his wife is the strict parent, and the kids Brookly, Romeo, Cruz and…

Aww, Nick Grimshaw – he’s a right sweetie isn’t he? And, you know what, we are bloomin’ loving him on the new X Factor panel. But it seems the pressure of facing an audience of millions, on live TV, AND in HD has been getting to the Radio 1 presenter.…

We love a game of Snog, Marry, Avoid here at Now HQ – except when people start throwing friends into the mix…it just gets too personal guys – and we definitely want our next round to be with X Factor’s Nick Grimshaw. Related: OUCH! This is what Graham Norton had…

Sure, Nick Grimshaw is now a big time kind-of-a-big-deal, what with him presenting that breakfast show on one of the biggest radio stations in the world. Oh, and the fact he’s a judge and basically in charge of people’s future on the X Factor. Related: WATCH Rita Ora confess she…

Radio 1 Nick Grimshaw and sassy songstress Rita Ora are the ultimate friendship goals this year on the newly re-vamped X Factor. They work together, they party together, they even go dog-walking to gether. Related: SEE Cheryl’s face as she finds out what song Olly Murs likes to snog to!…