Prince George became third in line to the throne when he arrived in 2013. He was born the first child of Prince William and Kate Middleton and the grandson of Prince Charles.

While pregant with George, Kate had been in hospital with severe morning sickness.

George was delivered weighing 8lbs 6oz in the Lindo Wing of St Mary’s Hospital, Paddington. His father Prince William and uncle Prince Harry were both born there.

However it was first revealed in a press release from palace officials.

He left the hospital with his parents on 23 July and his name was declared as George Alexander Louis the following day.

Baby George was christened in the Chapel Royal at St James’s Palace on October 2013. It was his first public appearance in three months.

It was also announced that Prince George would have seven godparents, including Zara Tindall, who is the cousin of Prince William and the daughter of Princess Anne.

Prince George set out on his first royal tour with his parents in April 2014. The family spent three weeks in New Zealand and Australia.

On 9 April, he made his first public engagement of the tour at a playdate at Government House, Wellington. It was arranged by the New Zealand parenting organisation Plunket.

Baby George’s other public appearance was on 20 April, Easter Sunday, when he met a bilby named after him at Taronga Zoo in Sydney, Australia.

The first birthday party thrown for George was themed around the children’s author Beatrix Potter, who knew members of his maternal ancestors.

In September 2014, it was announced that Prince George was set to be a big brother.

Prince George and Princess Charlotte have appeared in a brand new adorable photograph together with their parents the Duke and Duchess of Cambridge, which has been shared by Kensington Palace on Monday. The sweet portrait will appear on Kate and Prince William’s Christmas card this year and was captured by…

As thousands of children return to school this week, Prince George will be toddling off to learn and make friends at his new £18k-a-year London prep school. But whilst most of us have mixed memories of tucking in to school dinners – love them or loathe them – one thing…

Prince George is only three-years-old but, boy, does this cheeky chappy know how to melt our heart! And it’s not just our hearts he’s melted. It seems he also charmed most of the world too! George’s recent trip to Canada made us fall in love with our future king even…

Who remembers that one time Prince George was just the cutest thing ever?! Yup, false alarm. Because for lil’ George, ridiculous levels of cuteness is an everyday occurrence…. So, what has Kate’n’Wills’ first born been up to now?! Well, the teeny tot has been causing quite the transatlantic stir- having…

Happy Birthday Prince George! We can’t believe you’re three today! Times fly when you’re a naughty toddler right? Well we’ve watched you grow over the past three years and what an adorable little human you are! But one thing we’ve really adored is your dress sense. Now this obviously isn’t…

Isn’t time flying? It feels like just the other day when the Duke and Duchess of Cambridge welcomed Prince George to the world, and now he’s had his first day at nursery! The two-year-old had his first day at the Westacre Montessori School nursery in Norfolk today (Wednesday) and proud…

We’re used to seeing proud dad Prince William all smiles when he’s with his family – son Prince George, daughter Princess Charlotte and lovely wife Kate. And rightly so – they’re a gorgeous bunch! But the heir to the throne has revealed that fatherhood has made him a bit of…

Kate Middleton and Prince William have voiced their concerns about the safety of their children after paparazzi harassment reached a scary new level in recent weeks. The couple issued a statement today in the wake of a ‘disturbing’ incident where a photographer hid in the boot of a rented car…

It’s a seriously special occasion as on Wednesday this week, it’s Prince George’s second birthday! It might sound crazy, but it’s true. Blow the trumpets, put the bunting out and eat some scones because it has actually been two years since Kate Middleton and Prince William welcomed their adorable bundle…

A new photo of Prince George has been released to celebrate his birthday and it’s SO cute! The picture shows the young royal – who turns two years old tomorrow – giggling with dad Prince William in the gardens of the Sandringham House estate, taken during his sister Princess Charlotte’s…

Get ready for a right royal knees up! Princess Charlotte Elizabeth Diana‘s christening will take place at 4.30pm on Sunday 5 July when she’s just over two months old. Here’s everything you need to know… 1. The exciting royal event is happening at St Mary Magdalene Church on the Queen’s…

It’s just seven weeks since Kate Middleton, Duchess of Cambridge, gave birth to Princess Charlotte. And it was clear from photos of Kate larking around with Prince George at last week’s Gloucestershire Festival of Polo that she’s already lost most of her pregnancy weight. Now can reveal the 33-year old…

She gave birth to her second child just SIX WEEKS ago but Kate Middleton is already back in her Topshop skinny jeans. And we think we know how. The Duchess of Cambridge enjoyed a day out at the polo with her nearly two-year-old son Prince George and we feel breathless…

The world was quick to spot that Prince George wore an almost identical romper yesterday to the one his dad Prince William wore when he was the same age at the same event. But it’s not the first time Kate Middleton appears to have paid tribute to Wills’ late mother…

The adorable new pictures of Prince George and Princess Charlotte might have been released through the modern medium of Twitter but they actually hark back to the past in the sweetest way. Kate Middleton appears to have dressed her two children just like Princess Diana did with a young Prince…

Sometimes it’s hard to imagine Kate Middleton doing everyday mum duties but it seems that she’s just like the rest of us. The Duchess, 33, has been spotted play-acting with Prince George in a London park, the first time she’s been seen in public since the birth of daughter Princess…

Along with Prince George, we’re patiently waiting for HRH baby number two to arrive, here’s everything you need to be clued up about

Yes! Kate Middleton has recycled another outfit for her last royal engagements before signing off to have the HRH baby

Prince Charles has bemoaned that he hardly ever sees Prince George and that the Middleton's monopolise the 20-month-old's time. But it's only natural if you ask me...

The Palace has released details of all the royal gifts received last year - and Prince George got nearly 800!

George is a bit of a water baby

Prince George, the super-cute third in line to the throne, is growing up. Aww!

George is one today 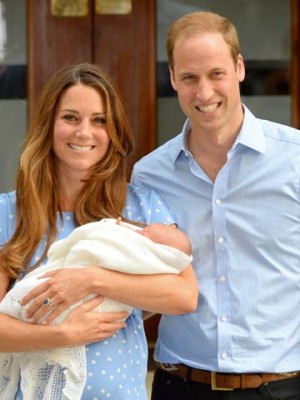 George has fun at butterfly exhibition