He is believed to be the godson of Elton John, David Furnish and Elizabeth Hurley. Romeo was delivered at the Portland Hospital in Westminster.

Romeo has an older brother Brooklyn, a younger brother Cruz and a little sister named Harper.

The Beckham family moved from England to Spain in 2003 when David was transferred from Manchester United to Real Madrid.

In 2006 it was revealed that Romeo suffers from epilepsy. Because of this, Victoria prevented him from coming in the range of photographers’ camera flashes.

After David signed a new contract with football team LA Galaxy, the Beckhams relocated to Los Angeles, California on 12 July 2007.

As the family’s move came when Romeo was only young, he started speaking with an American accent, along with his two brothers.

At only eight years old, Romeo was already being recognised for his sense of style.

He placed 26th on GQ’s Best Dressed Men list in 2011, and signed a deal to bring out his own line of sunglasses the same year.

In December 2012, he was handpicked to model for Burberry.

The Beckhams swapped the US for the UK at the beginning of 2013. In September that year, Romeo joined football club Arsenal’s youth team with the hope of getting a professional contract.

He has also competed at county level in 3km races across England.

In December 2013, Romeo Beckham entered the prestigious Junior Knole Run, where he came 111th out of over 260 competitors.

The young fashionista is following in her mother's footsteps wearing chic spectacles during family fun day out.

After two decades together, the Beckhams’ romance is still going strong as Victoria Beckham shared a touching tribute to her husband David Beckham ahead of the GQ Fashion Awards. Victoria, 45, took to Instagram just hours before David, 44, received the Editor’s Special Award at last night’s 2019 GW Men…

David Beckham has shared a rare family snap alongside wife Victoria and their four children during a trip to Miami. The sporting legend is currently enjoying life across the pond while working with his new football club, Inter Miami CF. READ MORE CELEBRITY NEWS The 44-year-old has been joined by…

Romeo Beckham is reportedly dating Stranger Things actress Millie Bobby Brown – and mum Victoria has given their romance her seal of approval. The 16-year-old first met Millie, 15, at Unicef’s 70th anniversary gala in December 2016, when she handed out an award to his dad David, 43. READ MORE…

David Beckham appears to take a literal approach to the school run. The former footballer has revealed that he joins sons Romeo, 16, and Cruz, 13, every morning as they jog THREE miles to school. READ MORE CELEBRITY NEWS MORE: Victoria Beckham sends fans wild as she makes HUGE announcement about…

It might not quite be his birthday yet but Victoria Beckham has given fans a glimpse of son Romeo’s early celebrations – and they were something VERY special. The teenager – who turns 16 on Saturday – was treated to a lavish dinner in the French Riviera last night during…

Born September 1, 2002, he’s the son of one of the most famous couples in the world but as Romeo Beckham turns 16, we look at how he’s become a celebrity in his own right… He grew up in front of the cameras going from cute baby to tearaway toddler. As the…

TOWIE star Chloe Sims isn’t shy when it comes to giving her opinions – it’s why we love her! And now the realty star has revealed her thoughts on Victoria Beckham after the mum recently came under fire for being a ‘pushy mum’. READ MORE CELEBRITY NEWS Now, in case…

With Victoria and David as parents, it’s unsurprising that the Beckham children are highly photogenic, and aren’t afraid to show it off. On Wednesday, Romeo Beckham, the second eldest son of Victoria and David, uploaded a snap on Instagram that showcased just how much he looks like his stunning mum…

Victoria Beckham is never one to underdress and has totally proved this with her interesting outfit choice to watch son Romeo practise playing tennis… The fashion designer, 43, was snapped supporting her boy in a pair of VERY high-heeled shoes in an Instagram shot posted by Romeo this week, who…

Victoria and David Beckham are VERY proud parents right now. Not only have they recently sent their eldest son, Brooklyn off to university (with some very emotional Instagram posts), but now the A-List pair have turned their attention to teenager, Romeo on his 15th birthday. Former footie player, David was…

Harper Beckham is, without question, one of the greatest celebrity children around – and she’s just getting cuter. The six year old was out on a family outing to The Museum of Ice Cream in Los Angeles, which looks like the greatest museum of all time, really. Cruz tweeted the…

We genuinely thought we couldn’t love David Beckham any more. Until now. The former footballer and dad-of-four has been spending quality time with sons Romeo, 14, and Cruz, 11, as well as daughter Harper by taking them on a gruelling hike in LA. Well, it looked gruelling. Taking to Instagram…

Any insight into the world of the Beckhams gets us very excited, so when David Beckham shared some photos of a day out with daughter Harper and son Romeo, a part of us melted. Too cute! Proud mum Victoria shares adorable snap of Harper Beckham at ballet class The football…

Being a celebrity parent in the age of social media can be difficult – with millions able to view your actions instantly, it opens a space for some of the most unexpected comments on parenting skills and decisions. Unfortunately, this is something that Victoria Beckham has discovered this week. After…

Forget his hotly tipped modelling career – Romeo Beckham is all about the tennis. We caught up with his coach after the 13-year-old had a training session with current world No 2 Andy Murray – and it seems Romeo’s parents David and Victoria will go to any lengths to help…

It’s every football dad’s worst nightmare – when your son turns around and says these fateful words: ‘I don’t want to play football anymore.’ This nightmare became a reality for David Beckham as second son Romeo admitted to his football-royalty father that he wanted to stop playing! Speaking to the…

Most of our first jobs involved throwing out newspaper around our neighborhood or counting down the hours on a Saturday while we continuously scan items through the check out. Related: SEE how Romeo Beckham celebrated his birthday! READ MORE CELEBRITY NEWS But if you’re Romeo Beckham, one of your first… 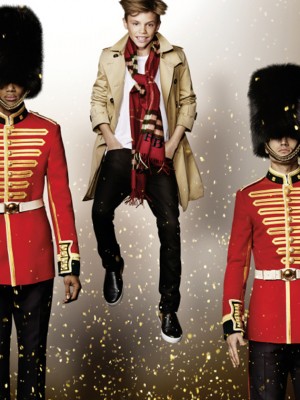 Romeo Beckham has teamed up with luxury British fashion label Burberry once again for their latest ad campaign and it’s BEYOND adorable. Little Romeo leads an all-star – and all-British – cast of actors, models and musicians in the campaign, which celebrates the festive season and the 15th anniversary of Brit flick Billy…

Nailing your airport wardrobe is a tricky task to master. You want to be comfy, yet cool. Warm, but not smothered. And you need just the right amount of pockets… So, if you’re looking for inspiration we suggest checking out Romeo Beckham‘s latest get up. Just look how cool he is.…

One thing we’ve learned about the Beckhams over the years is that they sure know how to throw a good party. David Beckham celebrated his 40th in incredible style back in May and then Harper had a cute little bash when she turned 4 over the summer, but this week…

The Beckhams are the most adorable showbiz family around. Check out these pics

As their 12-year-old son Romeo Beckham looks set to become a top model, Victoria and David Beckham are divided over whether it's the right move

The footballer spends time with his children 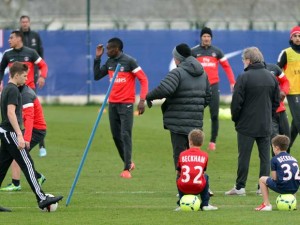 Lads enjoy a kickabout in Saint-Germain-en-Laye

We're all stick of Bieber's antics - and I reckon Romeo is too (...or daddy David Beckham told him to get rid of it)

David and Victoria's son is a natural model