Tess Daly was born as Helen Elizabeth Daly in Stockport to dad Vivian and mum Sylvia in 1969. She has a sister called Karen.

The talented youngster gained nine O-Levels at New Mills Secondary School before being spotted by a modelling agency.

She did her first job at 18 and went on to work all over the world. For a few years she lived in Paris and New York.

After further modelling work and appearances in music videos for the likes of Duran Duran, Tess Daly switched to television. She made her debut in 2000 hosting the Find Me A Model competition on Channel 4’s The Big Breakfast.

Over the years Tess hosted a variety of shows including SM:TV Live, Back To Reality and Make Me A Supermodel.

In 2004 she landed her most famous role on Strictly Come Dancing, which she co-presented with Bruce Forsyth until 2013. Claudia Winkleman took over as Tess’s co-host in 2014.

Tess married fellow model-turned-TV star Vernon Kay in 2003 after dating for two years. She gave birth to their first child, a daughter called Phoebe, in October 2004. Their second little girl Amber followed in May 2009.

The couple teamed up to front celebrity singing competition Just the Two Of Us in 2007.

A scandal rocked their relationship in February 2010 when Vernon confessed he’d been sending saucy texts and private Twitter messages to Page 3 model Rhian Sugden behind Tess’s back.

He had also contacted four other women and admitted to feeling ’embarrassed’ for what he’d put his family through. Tess stuck by her man and vowed they’d work through their problems.

Tess Daly has continued to be a regular face on our TV screens. She has hosted popular shows such as Children In Need and has filled in as a guest presenter on The One Show.

The star is clearly multitalented – she turned her hand to writing in 2011 when she released her first novel The Camera Never Lies.

Vernon Kay has been busy working over in the middle east recently and wife Tess Daly has been co-hosting Strictly Come Dancing so it comes as no surprise that they’ve had less time together recently. So Vernon, 45, made a declaration of how good it feels to be home when…

Strictly Come Dancing has finally revealed details of the launch show – and we’re even more excited for it to start now! Tess Daly and Claudia Winkleman will roll out the red carpet for the class of 2019 next month, and we’ll get our first glimpse at the 15 celebrities…

Tess Daly and Claudia Winkleman probably thought they’d escaped any further humiliation surrounding last year’s Strictly scandal (remember THAT kiss), but apparently not. Tess, 50, was left cringing in her seat at the BAFTA Awards on Sunday night when Graham Norton made a tongue-in-cheek about the scandal that rocked the…

Claudia Winkleman and Tess Daly have fast become two of our favourite presenters to watch on TV thanks to their stint hosting Strictly Come Dancing. View this post on Instagram Tea. A post shared by Claudia Winkleman (@amiclaudiawinkleman) on Oct 13, 2018 at 10:15am PDT So imagine our surprise –…

Shirley Ballas The Strictly  head judge looks arguably younger than she did back  in 2010. So what’s her secret? The 58-year-old swears by vampire facials – which involve taking  blood from your  arm, separating  the red and the  white blood cells  and re-injecting  it into your face – as well…

Claudia Winkleman is known for impeccable style, and last night was no exception as she attended GQ Magazine’s 30th anniversary party. The Strictly Come Dancing host looked super chic as she arrived at the new SushiSamba restaurant in London’s Covent Garden wearing a Gucci jumper. Claudia, 46, teamed the beige…

If we told you Tess Daly was 49 you probably wouldn’t believe us because the Strictly Come Dancing presenter has a figure most people would kill for. And, with two children – Phoebe, 13, and Amber, eight – husband Vernon Kay and a busy career, how exactly does Tess maintain…

Tess Daly‘s marriage to Vernon Kay hit rocky times in 2010 when he confessed  to sending inappropriate messages to glamour model Rhian Sugden as well as four other women. But it seems as though Tess is ready to forgive her husband once and for all. READ MORE CELEB NEWS READ:…

Strictly Come Dancing is a Saturday night staple – and the show only seems to be going from strength to strength. With all that glitz, glam and sequins, you’d expect some rather hefty pay packets going on from the BBC… so we did some research to find out how much…

Some of telly’s brightest stars braved a soggy red carpet on Sunday night as the TV BAFTAs took place in London. The rain may have been pouring, but that didn’t stop stars including Scarlett Moffatt, Katie Piper and Poldark’s Eleanor Tomlinson getting their glam on as they attended the swanky event.… 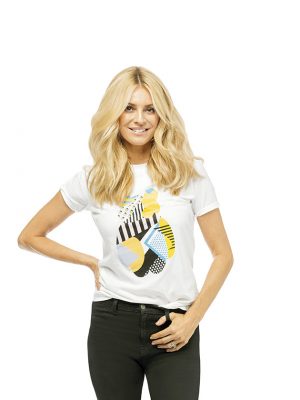 Join the likes of Joanna Lumley, Tess Daly, Alesha Dixon, Zoella and Jim Chapman by picking up this years t-shirt supporting Children in Need. As well as getting your hands on a real designer tee for just £12 you’ll also be supporting the amazing work that Children in Need do…

Rhian Sugden has been rushed to hospital after reportedly experiencing chest pains due to severe stress stemming from her sexting scandal with Vernon Kay. The Celebrity Big Brother star, who came back into the limelight earlier this year after it emerged she was back in contact with Vernon, six years…

Gogglebox star Scarlett Moffatt has waded into Vernon Kay’s sexting drama by admitting that she ‘strongly dislikes’ Tess Daly – and she’s on Vernon’s side! The outspoken TV personality never shies away from giving her opinion, and now, as her book Scarlett Says is coming out, she’s waded into the…

Vernon Kay and Tess Daly have flown to the Caribbean on an emergency holiday to save their marriage, according to reports. The couple have reportedly gone on the trip with their two daughters to escape the Rhian Sugden sexting storm. A source told the The Sun: ‘The last few weeks…

According to The Mirror, Tess Daly has finally broken her silence over husband Vernon Kay‘s recent headlines. Recent allegations have suggested that 41-year-old Vernon had began texting glamour model Rhian Sugden once more- over six years after his relations with 29-year-old Rhian almost caused his split from wife of thirteen years, Tess. Since these allegations,…

Rhian Sugden has broken her social media silence with a cryptic tweet about ‘liars’. The former Page 3 model, who is currently embroiled in a sexting scandal with married Vernon Kay, posted a now-deleted picture of Pinocchio with the words: ‘A liar should have a good memory #TwoSides.’ While it’s…

Vernon Kay has spoken out following fresh allegations that he exchanged texts with glamour model Rhian Sugden, six years after he was originally caught sending sexy messages to the Page 3 star. Posting on his official Facebook page, Vern confirmed that he had been in touch with Rhian, but insisted that…

See the couple throughout their relationship...

Dodgy music videos are a bit like dodgy kebabs- they’re both a bit, y’know….dodgy. And, just like that greasy burger van down the road from your house that 100% adds rubber to their onions (we see you, evil burger van people), we had always presumed that  Kim Kardashian was pretty secure…

At just 18 years old, ‘headstrong’ Tess Daly left her traditional countryside home in the Peak District to start a modelling career that would take her across the world to Tokyo! READ MORE CELEB NEWS Related: Strictly’s Tess Daly: ‘I’m a strict mum when it comes to bedtime, manners and…

Strictly Come Dancing presenter Tess Daly, 46, has confessed that her and her husband, Vernon Kay, 41, have strict rules with their children. While it’s a relief to know that the off spring of glamorous celebrities have fairly regular and well-rounded lives, we can’t believe that the lovable Tess has…

The couple have worked through problems

Presenter could go on his wife's show

Claudia Winkleman's daughter suffered burns after her costume caught fire, but is now on the mend according to Tess Daly

Tess Daly looks great in just about anything...

The mum-of-two had an embarrassing incident

Vernon's not been sidelined

Presenter isn't planning to get pregnant