Before finding fame on the BAFTA award-winning show The Only Way Is Essex, Tom Pearce was raised in Chigwell, Essex with his sisters Alex and Lily.

He went to school with best friend and future co-star Joey Essex, as well as Pixie Lott’s brother Stephen.

Tom later enrolled at Loughborough University to study economics, where he graduated with first class honours.

Following his education, he went straight to work for a top investment bank.

Tom always wanted to follow in the footsteps of his father, who’s a successful broker in London, and passed Financial Services Authority exams so that he could legally trade.

On 15 April 2012, Tom Pearce made his first television appearance as part of TOWIE’s supporting cast.

He was introduced as Joey Essex’s school friend and new flatmate in series five of the hit show.

He took an interest to newcomer Abi Clarke in series eight. Things between the pair fizzled out when he discovered that she had previously had a fling with his best friend James ‘Diags’ Bennewith.

In June 2012, he defended the cast of TOWIE in a blog that he wrote for the Huffington Post. Tom hit back at claims that they were all ‘uneducated idiots’ by describing some of their achievements and highlighting the programme’s entertainment purpose.

He split up with The Bachelor 2012 winner Khloe Evans in early 2013. The couple were together for around six months and parted ways just days after Valentine’s day.

In May of the same year, Tom Pearce launched his online clothing store NoAgg.com.

Amy Childs has been spotted on dates with fellow ex-TOWIE star Tom Pearce, and her parents reportedly approve!

Say goodbye to those dreamy blue eyes! Tom Pearce has reportedly been booted off TOWIE

It's your #PhwoarrOClock delight of toplessness – kind of like having a chocolate biscuit, minus the calories!

Part One: It’s 7am and the bleary-eyed TOWIE cast are about to board a plane for Marbs…Now’s GossipCam joins them for some on-board entertainment. GossipCam crew prepare for lift off!

The hunky TV stars show off their buff bods

Lucy Mecklenburgh has moved on since splitting from Mario Falcone

We get the TV hunks topless

See the TV hunk's hot body in our exclusive video

TOWIE's biggest lothario opens up about his love conquests

She's been on a date with the TOWIE hunk

Is the reality star at the centre of a love triangle? 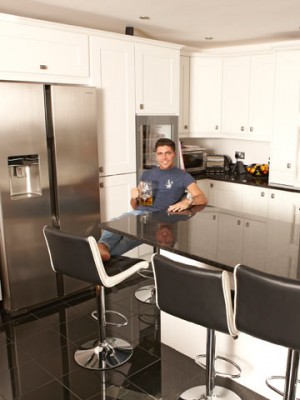 The TOWIE star shows us round his pad (actually it's his parents'!)